Urban Muaythai is a family run business that was established in January 2010. We teach the beautiful art of Muay Thai to beginners through to the elite fighters. This sport originated in Thailand and is still a thriving sport around the world. At Urban Muaythai you will FEEL like you BELONG.

Your training will be guided by Richard Walsh, the founder of Urban Muaythai, and our Head trainer. Richie has 25 years experience in Muaythai was a Victorian State Champion and has won the 2013 “Australian Muaythai Awards” for Trainer of the Year, was nominated Youth Trainer of the Year 2014 and 1999 BJC Trainer of the year. He has trained many elite fighters over the years from Nathan “Carnage” Corbett, John Wayne Parr, Paul Briggs, Shannon F16 Forester and many up and coming fighters. He is currently the Muaythai Australia National President, the MTA QLD President and holds his Certificate 3 and 4 In Fitness and Personal Training.

His Wife Melissa Walsh was the silver medalist in the 2012 World IFMA Games in St-Petersburg, Gold Medalist in 2003 World IFMA Games, Queens Cup Champion in Thailand 2005, and between 2001-2007 held the South Pacific, Australian, and State Title Belts. She is a qualified Naturopath and together Richie and Melissa have three Cheeky boys, Noah, Charlie and Harry. 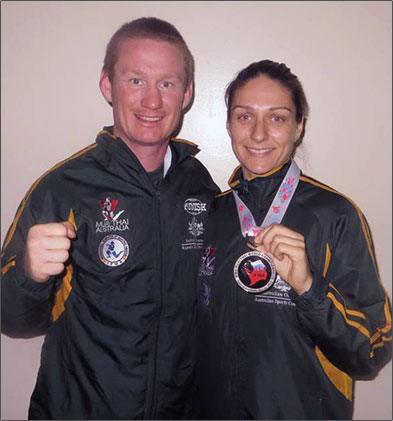 We know that trying something new is daunting, so we’ve asked some of our members to share stories from when they started at Urban so that you can get to know us a bit better.